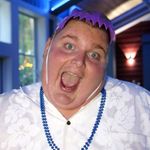 @mark.mahabir I'm not sure if that's the case as I've got 2 machines I'm testing on and 1 has an admin user initiate and the other is a standard user and they both exhibit the same issue :(